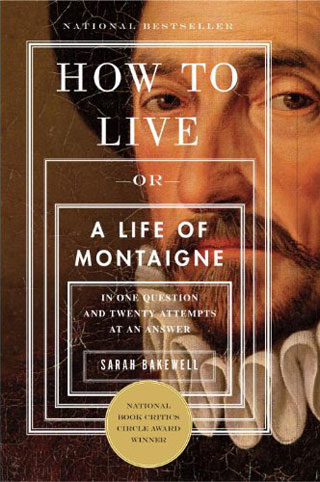 Montaigne invented the essay (from the Old French essayer, which means, to try) and in many ways remains its best practitioner. Bakewell brilliantly extracts principles for living from his life and letters; this is a biography which is transparent about its purpose. I found myself nodding and circling sentences in assent on nearly every page.

Much of Montaigne’s essays deal with the form of the essay itself, and, in particular, with the way his essays—his attempts—are always tentative:

If my mind could gain firm footing, I would not make essays, I would make decisions; but it is always in apprenticeship and on trial.

Bakewell, How to Live, page 36

If others examined themselves attentively, as I do, they would find themselves, as I do, full of inanity and nonsense. Get rid of it I cannot without getting rid of myself. We are all steeped in it, one as much as another; but those who are aware of it are a little better off—though I don’t know.

Bakewell, How to Live, page 43

Bakewell comments, “That final coda—‘though I don’t know’—is pure Montaigne. One must imagine it appended, in spirit, to almost everything he ever wrote.” We might now identify that kind of writing as a hedge and feel inclined to strike it. But perhaps we should resist that urge: maybe instead of presenting confidence even when we don’t feel it we should welcome honesty. Let’s reward those who can admit their ignorance rather than those who can convincingly bluff.

However strongly held today, our current concept of plagiarism (and, relatedly, copyright) has evolved over time, and emerged largely in the eighteenth century and later; earlier writers worked very differently, and may even have seen borrowing from their predecessors as ideal.

Plutarch was to Montaigne what Montaigne was to many later readers: a model to follow, and a treasure chest of ideas, quotations, and anecdotes to plunder. “He is so universal and so full that on all occasions, and however eccentric the subject you have taken up, he makes his way into your work.” The truth of this last part is undeniable: several sections of the Essays are paste-ins from Plutarch, left almost unchanged. No one thought of this as plagiarism: such imitation of great authors was then considered an excellent practice. Moreover, Montaigne subtly changed everything he stole, if only by setting it in a different context and hedging it around with uncertainties.

Bakewell, How to Live, page 66

In professional contexts, I consider plagiarism unethical at worst, sloppy at best. But I wonder, with copying made easier—automatic, even—if that idea can hold for long. If plagiarism was good enough for Montaigne, maybe we shouldn’t be so quick to dismiss it. (But then, I don’t know.)