In many an organization, consensus decision making is a strangely contested practice: often reviled for its perceived inefficiencies but also quietly coveted for the promise of inclusion. As a result, it’s either avoided, or else engaged in only half-heartedly. I’ve even seen groups try to build consensus without ever using the “c” word which, to put it mildly, defeats the purpose. All of this is a shame, because consensus decision making has real, tangible value, especially during periods of transition or uncertainty.

The first complaint often raised when it comes to building consensus is that it will take too much time. Setting aside the question of whether the urgency most teams feel is justified, it isn’t necessarily the case that consensus decision-making processes require more time. The big difference between consensus processes and more hierarchical decision making is that the former is inclusive of building alignment among the people impacted by the decision. Put another way, in a hierarchical process, often a decision is made quickly, and then days or weeks or months are spent getting buy-in after the fact; or—worse—the decision is continually contested, or else it’s accepted at face value but subverted through a simmering lack of support. In a consensus decision-making process, the decision and the buy-in land at the same time. Rather than making a decision and then getting everyone on board, you get everyone on board, at which point the decision is clear.

This is where it pays to recall that the root of consensus is consent, with all the attendant associations (to be in accord, to be in harmony, to sympathize with) that comes with that word. When people consent to a decision, they are more likely to abide by it, and to move in concert with it. If the decision is forced upon them, they may (consciously or otherwise) work to subvert it.

The other bit of reluctance I’ve heard about consensus processes is that they’re frequently unstructured or opaque. More than once I’ve observed a leadership team claim they were working to build consensus around a key strategy but all anyone could see was a bunch of people with different opinions settling into their respective corners, wrapping their hands for a fight. The “building,” if it was happening at all, was invisible. But there’s a simple way to avoid this trap, and it’s to have each member of a group declare their position.

This goes something like this: within a group, a proposal is put up for a decision. (The proposal may be made by one or more members of the group, or it may come from one or more people outside the group.) The group discusses the proposal, and then each member of the group states their position on the proposal. Three positions are possible:

Consensus is only achieved when there are zero blocks and a small number (say less than 20% of the group) standing aside. Lack of consensus does not necessarily doom the proposal. Those in support can then invite the people blocking or standing aside to name their concerns, request revisions to the proposal, or make a counterproposal.

This process requires people to voice where they stand on the decision in an unequivocal way, and makes clear during the process of building consensus where people are at. That transparency is helpful both for members of the group, and—should they choose to share this information—with other people within the company who may not be party to the decision but who are interested in where it lands. The latter is especially helpful for leadership groups, who often need time to build consensus around significant decisions, but who must still report out to their departments about what’s going on. Saying, “We’re still working on it,” after weeks of quiet deliberation does not inspire confidence. Saying instead, “We’ve resolved all the blocks; two people are still standing aside and we’re working through their concerns this week. The plan is to revisit everyone’s position again next week,” is a lot clearer and more comforting, in that it demonstrates both the current status of the decision and the movement towards a resolution.

I think it also pays to remember that decision making—whether hierarchical or consensus-based—is as much art as science. There’s a passage in Misha Glouberman and Sheila Heti’s excellent The Chairs Are Where the People Go that I return to often. In it, they write:

There’s a really important thing that sometimes nervous people like me don’t realize—that the expression “to make a decision” is perfectly accurate: a decision is something you create. There’s an inclination to think that with enough research and thinking and conversation and information, it’s possible to determine what the correct decision is; to think that decision making is an intellectual puzzle. But generally it’s not. You make decisions. Something is created when you make a decision. It’s an act of will, not an act of thought.

Glouberman and Heti, The Chairs Are Where the People Go, page 86

From this I take that while we can and should work to bring order and clarity and healthy dialogue into our decision-making processes, we should also accept that some part of that process will always be ineffable. That’s the nature of creativity. And while it can be a source of conflict—creating something new nearly always creates friction with what was there before—it’s also a lovely opportunity for serendipity and solidarity and the genuine joy that comes with making something. 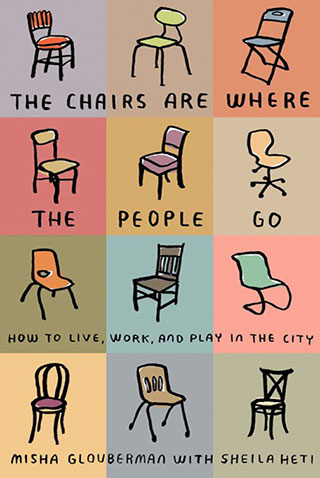 A unique collaboration between Misha Glouberman—a performer and artist—and his friend—the writer Sheila Heti—results in this charming and instructive collection of parables.