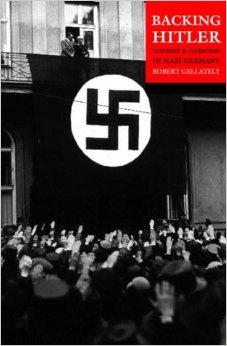 Robert Gellately’s close history of the Nazi period focuses on one particular question: how much did ordinary Germans know about what was going on? By exploring the press of the day as well as other sources, the answer is quite clear: they knew a great deal. Executions were commonly publicized; indeed, Hitler felt it was important to publicize them so that they could serve as a deterrant. Concentration camps were scattered about the country, and prisoners were frequently marched out to serve as labor for the war effort, such that the sight of malnourished prisoners forced to perform labor under hideous circumstances could not have been uncommon. And perhaps most chillingly, the Gestapo and Kripo relied upon a system where ordinary people would “denounce” their colleagues, neighbors, and even family, in full recognition of the consequences. Gellately doesn’t entirely answer why this was the case, although he suggests that while antisemitism and racism played a significant part, there were also many other more instrumental motivations. But he makes very clear that ignorance is no credible excuse. A wise lesson.

There are many conclusions in Robert Gellately’s Backing Hitler that feel relevant to current events, but two stand out. First, on the nature of Nazi propaganda:

Nazi propaganda was not, and could not, be crudely forced on the German people. On the contrary, it was meant to appeal to them, and to match up with everyday German understandings. Another way of thinking about the content of this propaganda, which was meant to be attractive and convincing, might be to regard it as “an indicator of what people sincerely hoped to be true.” Thus far from forcing unwanted or repellant messages down the throats of the population, Hitler and the Nazis carefully tailored what they said, wrote, and especially what they did, in order to win and hold the support of the people.

Gellately, Backing Hitler, page 259 </blockquote> Emphasis mine; Gellately elsewhere notes that the Party frequently adjusted their plans and messaging in order to maintain the support of the German people, so attuned were they to ordinary citizens’ concerns. Another telling detail is how much those citizens not only consented to what the Party was doing, but actively supported it:

Until recently, historians frequently emphasized the passivity of German citizens in the Third Reich, and wrote about the Nazi “police state” as if it were so invasive as to leave little room for citizen initiative beyond mere ceremonials and rituals. We now know that even if all citizens did not agree with everything, including certain aspects of the persecutions of the Jews and foreign workers inside Germany, the regime had no difficulty in obtaining denunciations from the population about suspected breaches of the racist system. Providing information to the police or the Party was one of the most important contributions of citizen involvement in the Third Reich. After all, it was one thing for the regime to promulgate new laws and ordinances, to shout the regulations from on high, but quite another to enforce them in society at large. It was a characteristic feature of the Third Reich, one that set it apart from Italian Fascism, that the regime found no difficulty in obtaining the collaboration of ordinary citizens. People cooperated when it came to enforcing antisemitism and the racial measures aimed at foreign workers, and they were certainly not reluctant about informing when it came to ordinary crimes.

Gellately, Backing Hitler, page 261 </blockquote> Gellately goes into detail about the system where people would denounce colleagues and friends and neighbors for often minor infractions like listening to foreign radio. In fact, there were so many denunciations, many of which appeared hyperbolic or entirely fabricated, that Hitler himself was said to have grown concerned. Many of the denunciations had both racist and instrumental motivations: neighbors denounced neighbors so as to get at their property, employees denounced bosses they didn’t like. Gellately even finds an example of a man who denounced his wife; when the Gestapo tried to warn him that the consequences of such a denouncement were severe, he persisted anyway. The lesson here is that given cover, people are willing to deploy bureaucracy in their favor—even if the benefits are small, and the moral cost stunningly high.