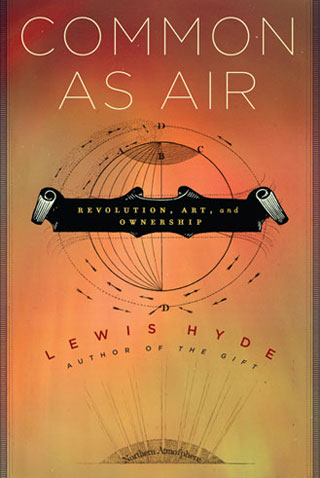 Hyde addresses the history of copyright, and demonstrates that the founding fathers were not at all fans of it. Rather, they understood that a cultural commons needed to be regulated and protected, much as an agricultural commons needs to be defended against enclosure. As such, any encroachment on the commons must be limited and temporary, and designed for the public good, not private gain.

Hyde defines some of the historical arguments for copyright protection:

One assumes that all creative men and women have a natural right to the fruits of their labor and that, where non-excludability makes it hard to claim those fruits, society should intervene. (If it takes me ten years to write my novel, it is right and proper for the law to help me earn my rewards.) Another answer assumes that creative work is a kind of extension into the world of the creator’s personality and that the work therefore deserves the same respect and protection that we accord to individuals. (My novel bears the stamp of my being; others should not be able to insult it, mutilate it, misattribute it, or use it to earn money without my permission.) Here the concern is not simply with just reward for effort spent but more broadly with questions of honor, respect, and reputation.

Both the labor theory and the moral rights theory, as these are called, focus on the individual creator. The third argument in support of otherwise “unnatural” exclusive rights does not ignore the individual but it begins, by contrast, with the needs of the community. If the group as a whole would benefit from a constant flow of useful and wonderful creations, and if an exclusive right would motivate creators to make these things, then why not offer it? After all, if public goods are common by nature, then their very nature is an impediment to their production (so long as producers need to earn a living).

This last point is an important one, and one in which the digital creation (in its infinite distribution) is most disruptive. It’s hard for information to be free when lunch isn’t.