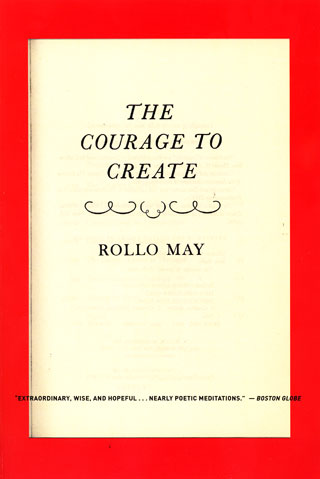 An approach to creativity from an existential psychologist. May sees creativity as the ultimate goal of all people (not merely those traditionally deemed “creative”) and links creativity to well-being and a desire to make the world a better place.

The relationship between commitment and doubt is by no means an antagonistic one. Commitment is healthiest when it is not without doubt but in spite of doubt. To believe fully and at the same moment to have doubts is not at all a contradiction: it presupposes a greater respect for truth, an awareness that truth always goes beyond anything that can be said or done at any given moment. To every thesis there is an antithesis, and to this there is a synthesis.

May, The Courage to Create, page 21

Creativity must be seen in the work of the scientist as well as in the artist, in the thinker as well as in the aesthetician; and one must not rule out the extent to which it is present in captains of modern technology as well as in a mother’s normal relationship with her child. Creativity, as Webster’s rightly indicates, is basically the process of making, of bringing into being.

May, The Courage to Create, page 40

Creative people, as I see them, are distinguished by the fact that they can live with anxiety, even though a high price may be paid in terms of insecurity, sensitivity, and defenselessness for the gift of the “divine madness,” to borrow the term used by the classical Greeks. They do not run away from non-being, but by encountering and wrestling with it, force it to produce being. They knock on silence for an answering music; they pursue meaninglessness until they can force it to mean.

May, The Courage to Create, page 93

When I am engaged in writing something important to me, I find that if I engage in the customary twenty-minute meditation period before writing, my universe has become too straightened out, too orderly. Then I have nothing to write about. My encounter has vanished into thin air. My “problems” are all solved. I feel bliss, to be sure; but I cannot write.

May, The Courage to Create, page 94

Apropos of the noise:

We live in a world that has become mechanized to an amazingly high degree. Irrational unconscious phenomena are always a threat to this mechanization. Poets may be delightful creatures in the meadow or the garret, but they are menaces on the assembly line. Mechanization requires uniformity, predictability, and orderliness; and the very fact that unconscious phenomena are original and irrational is already an inevitable threat to bourgeois order and uniformity.

May, The Courage to Create, page 68

What people do out of fear of irrational elements in themselves as well as in other people is to put tools and mechanics between themselves and the unconscious world. This protects them from being grasped by the frightening and threatening aspects of irrational experience. I am saying nothing whatever, I am sure it will be understood, against technology or techniques or mechanics in themselves. What I am saying is that the danger always exists that our technology will serve as a buffer between us and nature, a block between us and the deeper dimensions of our own experience. Tools and techniques ought to be an extension of consciousness, but they can just as easily be a protection from consciousness. Then tools become defense mechanisms—specifically against the wider and more complex dimensions of consciousness that we call the unconscious. Our mechanisms and technology then make us “uncertain in the impulses of the spirit,” as the physicist Heisenberg puts it.

May, The Courage to Create, page 68

I like that phrase: “uncertain in the impulses of the spirit.” An “impulse” can be defined as a desire to act, or a force that causes a change in momentum. Rote mechanization pushes against that force and keeps you on the same path, when perhaps you should have veered off.