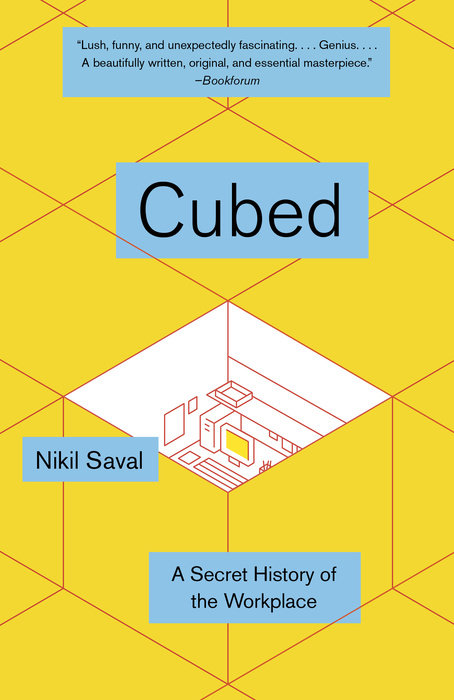 An insightful history of professional work, Nikil Saval’s Cubed interrogates how we work by digging into where we work, and the way those workplaces have changed and evolved—from the earliest clerk’s offices to skyscrapers to the arcades of modern-day tech campuses, and all the cubicles in between. Saval is at his best when he draws from his wealth of historical research to spot the ways in which modern workplace theology is no where near as innovative as it claims to be. I found myself wishing for an updated edition, one where he turned his eye towards the changes wrought by the pandemic. But that’s unlikely: today, Saval is State Senator for the First District of Pennsylvania—that is, my district.

In Cubed, Nikil Saval traces the beginning of the professional class of workers back to the clerks memorialized in Melville’s Bartleby, the Scrivener. Among the things he identifies: the earliest clerks saw themselves apart from other kinds of workers, and fashioned a distinctly different ideology about the nature of their work—one that is depressingly familiar:

Manual workers earned hourly or piece-rate wages, while nonmanual workers earned annual salaries. What this meant for white-collar workers, in an American economy beset by intense fluctuation in prices and frequent financial panics, was a measure of stability that manual workers never enjoyed. A small shift in power had begun to take place. If people who “worked with their hands” still assumed their possession of the world of things, clerical workers, those “working with their heads,” were now at the heart of capitalism’s growing world of administration and direction—close to power, if not exactly in control of it.

And so unlike “solidarity,” the key word of the European industrial labor movement that had made its way to England and America, the ethic that had begin to take hold among clerks was that of “self-improvement.” Clerical workers were uprooted from the close-knit world of families and farms, where knowledge was passed down from father to son. Other clerks were merely competition; they had no one to rely on but themselves. “The man who does not at least propose to himself to be better this year than he was last must be very good or bad indeed,” wrote the merchant’s clerk Edward Tailer in his diary entry on New Year’s Day 1850. There is, he continued, “no such thing as a stationary point in human endeavors; he who is not worse today than yesterday is better; and he who is not better is worse.”

There is a certain kind of awareness that comes from realizing the tradition of using New Year’s to consider how you will improve your (working) self goes back at least one hundred and seventy one years. But what’s really telling about Saval’s analysis here is the way in which self-improvement is seen as antithetical to solidarity: focusing your energies on yourself, and beating out your peers, takes up the kind of space that collective action might have. And still often does, alas.

Among the threads that Saval traces in Cubed is that of the evolution from Taylorist “scientific management” (with its emphasis on mass-production and unskilled labor) to post-Fordist methods (with a stated preference for flexibility and innovation). But Saval notices that this supposed evolution rests on a shaky interpretation of the past:

Knowledge work itself came from a historic shift, one that [Peter] Drucker, like so many, traced to Frederick Taylor. But his version of history was marked by a curious and useful elision. In Drucker’s account, Taylor came upon a working world characterized by rote, nearly mindless, activity. It wasn’t so much planned as willed: the workers simply worked harder rather than “smarter.” Until Taylor, that is: “Taylor, for the first time in history, looked at work itself as deserving the attention of an educated man.” Drucker’s subsequent description of the insensate labor of unskilled men in factories draws almost entirely from Taylor’s portrait of them—and accordingly condescends to their abilities to plan and organize work. In actual fact, it wasn’t so. Before Taylor, work was already organized by teams of factory workers, who in large part had control over how they worked. The knowledge they applied to work was largely “tacit” in nature, agreed upon among the workers themselves and developed through a silent or coded language, rather than “explicit” (to borrow a famous definition from the sociologist Michael Polanyi). What Taylor sought in particular—indeed, what constititued his signal obsession—was to extract this tacit knowledge from the workers and install it in another set of people, the “industrial engineers.” Drucker called them the “prototype of all modern ‘knowledge workers’”—a plausible assumption but one that excised the tremendous amount of knowledge that already existed in the work process. (Taylor lamented that after being taught “the one best way,” workers had a stubborn tendency to return to their own ways of working.) It was a useful fiction, and a common one, that helped to uphold a new class of technicians and professionals as the masters of an ever more progressive society, dependent on the application of knowledge to work.

I take a few things away from this: first, that the idea that manual laborers are unskilled is, of course, a lie—they have been deskilled, having had the use of their skills stripped from them and given to their bosses, supposedly the only ones who could be trusted with that information. But just as importantly, the notion that the modern-day workplace has done away with deskilling is itself a useful fiction. Hierarchical management structures across industries routinely serve to hoard planning and process decisions at the top. Even the language of “knowledge workers” elides who has power to declare which knowledge is right and actionable. Drucker’s vision of the modern workplace was glossier than Taylor’s, but it papered over the power structures rather than upending them.