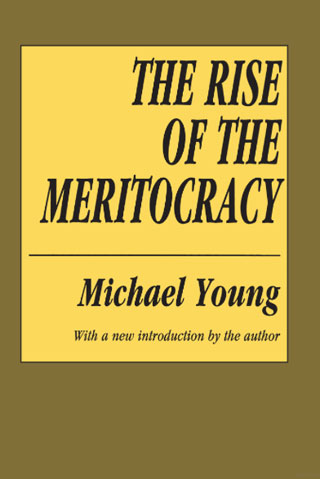 Young’s 1958 treatise introduced the word “meritocracy” into the lexicon, something he himself would later regret. The book is a work of satire; the subsequent claims that the meritocracy is real are a scam which draw upon the book’s suggestions without understanding (or caring) for their consequences.

A close look at the origins and evolution of the word “meritocracy,” and the politics that our language reveals.

In 1994, Transaction Publishers re-released Michael Young’s canonical work, The Rise of the Meritocracy, with a new introduction from the author. In it, Young comments on the book itself and reflects on its (and the word’s) now notorious history:

The argument of this book is that if the soil creates castes the machine manufactures classes—classes to which people can be assigned by their achievement rather than ascribed by their birth. Insofar as this has happened, social inequality can be justified, and, to avoid too blatant a contradiction, such a justification is almost always needed in a democratic society which has bowed to equality at least as far as elections are concerned. Otherwise the people who exercise power are going to be undermined by self-doubt and people over whom power is exercised become indignant and subversive because they deny that the others have any right to lord it.

Young, The Rise of the Meritocracy, page xiii

Emphasis mine. This is oft-forgotten by those who ignorantly claim that the meritocracy is real: the meritocracy requires inequality, and so necessarily musters a defense of it. You can’t support the idea of meritocracy without also demeaning any notion of equality. Young continues:

The book was always meant to make that kind of case, and most people who have commented on it, or referred to it without ever having read it...have implicitly, or even explicitly, accepted that this must have been the case that I was trying to make. They have neglected, or not noticed, the fact that the book is satirical, and although sociology, and therefore properly earnest, it is also in an older tradition of English satire. I know that in those island clothes the book may not travel so well. But if the book is not seen to be counterargument as well as argument, the point of it (or at least a good half point) will be lost.

Young, The Rise of the Meritocracy, page xv

I’ll take that one step further: it’s not just the book that contains its own counterargument, but the very idea of meritocracy that does so.