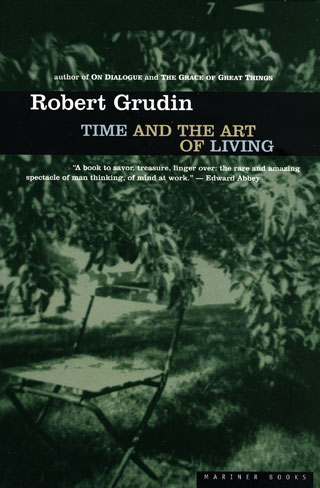 Short, almost journal-like essays on our relationship to (and against) time. In the aggregate, Grudin describes a means of living purposefully, experiencing what time we have as completely as possible.

Some perspective on the art of procrastination:

Every time we postpone some necessary event—whether we put off doing the dishes till morning or defer an operation or some difficult labor or study—we do so with the implication that present time is more important than future time (for if we wished the future to be as free and comfortable as we wish the present to be, we would perform the necessary actions as soon as they prove themselves necessary). There is nothing wrong with this, as long as we know what we are doing, and as long as the present indeed holds some opportunity more important than the task we delay. But very often our decision to delay is less a free choice than a semiconscious mechanism—a conspiracy between our reasoning awareness and our native dislike of pain. The result of this conspiracy is a disconcerting contradiction of will; for when we delay something, we simultaneously admit its necessity and refuse to do it. Seen more extensively, habitual delays can clutter our lives, leave us in the annoying position of always having to do yesterday’s chores. Disrespect for the future is a subtly poisonous disrespect for the self, and forces us, paradoxically, to live in the past.

Grudin, Time and the Art of Living, page 101

As I’ve acquired more responsibilities, I’ve also become more careful about keeping track of everything I need to accomplish, and not letting myself get behind. I always try to end the day feeling like there is more work behind me than ahead.

Few fallacies are more dangerous or easier to fall into than that by which, having read a given book, we assume that we will continue to know its contents permanently, or, having mastered a discipline in the past, we assume that we control it in the present. Philosophically speaking, “to learn” is a verb with no legitimate past tense.

Grudin, Time and the Art of Living, page 110

I’m amazed at how quickly I can unlearn a book read last year, let alone years ago. I think this is part of the attraction of a physical library for me: it’s a record of what I’ve read before, without which I would almost certainly forget. See also:

Reading is not just acquainting ourselves with a text or acquiring knowledge; it is also, from its first moments, an inevitable process of forgetting.

Even as I read, I start to forget what I have read, and this process is unavoidable. It extends to the point where it’s as though I haven’t read the book at all, so that in effect I find myself rejoining the ranks of the non-readers, where I should no doubt have remained in the first place. At this point, saying we have read a book becomes essentially a form of metonymy. When it comes to books, we never read more than a portion of greater or lesser length, and that portion is, in the longer or shorter term, condemned to disappear. When we talk about books, then, to ourselves and to others, it would be more accurate to say that we are talking about our approximate recollections of books, arranged as a function of our current circumstances.

Bayard, How to Talk About Books You Haven’t Read, page 47

A tale of barns and space:

To illustrate his respect for traditional English building techniques, a friend told me a story about a building contractor who was commissioned to tear down an old English barn. Common practice in these cases is apparently to hitch one’s bulldozer to the uphill corner post and pull it out diagonally until the structure collapses. This main secured his chain to the post in question, mounted his machine, and began tugging away, without any noticeable results. He gritted his teeth and opened up the throttle until finally, with an awful wrenching and dragging noise, the bulldozer began to move. The contractor looked back to see the whole barn following him up the hill in one piece.

We have all heard stories of this kind; in general they are used to accord the nobility to those products of human art and effort which “resist the ravages of time.” But perhaps the opposite is true. We do not say, for example, that the ancient builders of this barn kept their edges true, their angles square, and their boards flush in order to resist the ravages of space. Rather, they did these things in compliance with the laws of the three dimensions; and this compliance, it seems, brought them into accord with the fourth dimension, time. More generally, it can be argued that all things which endure do so by achieving harmony with the order of the four dimensions. Conversely, things being in defiance of this order, like the enormous Gothic cathedral piled up by the pretentious citizens of Beavais, fall and crumble.

Grudin, Time and the Art of Living, page 21

So: things that last are things that are well made. What signifies “well made” on the web? Perhaps, it is simply things that have been made with care; that is, things cared for in their creation and in the days since. Maybe caring about the things we make is enough to keep the barn following us up the hill for a long time to come.