Given print culture, one may add to the contents of card catalogues; but there is no way of subtracting from them.

Eisenstein, The Printing Press as an Agent of Change, page 172

This is part of a longer argument that Eisenstein makes in regard to the changes wrought by mass-printing of books. Notably, that whereas before texts were frequently discovered and then lost again—given the scribal system’s inability to distribute a text widely or accurately—after mass-printing came of age texts were discovered, never to be lost again. Which begs the question of what happens when the text is entirely digital. Is digital text, with it’s greater distributive powers—able to appear in the laps of millions of readers moments after the author hits submit—also capable of the fixity which Eisenstein speaks of? Or are we returning to something akin to the scribal era, when texts appeared and disappeared, like players making their entrance then vanishing forever off the stage? 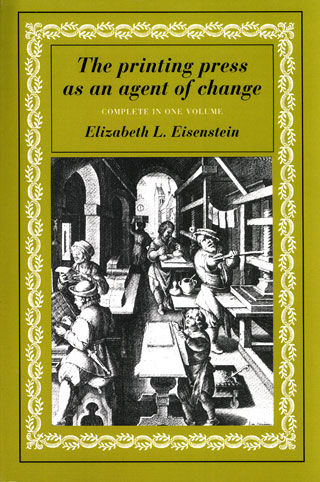