The first involves the marriage fraud provisions of the Immigration and Nationality Act. The act attempts to protect against fraudulent marriages by requiring that people who immigrate to the US in order to marry a US citizen remain married for two years before they can apply for permanent resident status. Of course, this provision means that someone who is in an abusive relationship has to risk deportation if they report that abuse or attempt to leave their spouse. Crenshaw explains:

In 1990, Congress amended the act to include an exception for domestic violence; but to apply for the exception required documenting the abuse, something that could be challenging if not impossible for an immigrant who may be isolated in her community, unable to navigate complicated legal or medical systems.

A second example concerns a case where a well-intentioned “ally” managed to reproduce rather than subvert oppression. The case involved a Latina and her son fleeing the woman’s partner, who had threatened to kill them. She reached out to a domestic violence hotline in New York where she found a counseler who attempted to place her in a shelter. But the shelter’s policies prohibited accepting women who couldn’t speak English as they had no Spanish-speaking staff. The counseler offered that the woman’s son could translate for her, but the shelter refused, stating a residency requirement that all women participate actively in a support group where only English was spoken. Writes Crenshaw:

Despite this woman’s desperate need, she was unable to receive the protection afforded English-speaking women, due to the shelter’s rigid committment to exclusionary policies. Perhaps even more troubling than the shelter’s lack of bilingual resources was its refusal to allow a friend or relative to translate for the woman. The story illustrates the absurdity of a feminist approach that makes the ability to attend a support group without a translator a more significant consideration in the distribution of resources than the risk of physical harm on the street. The point is not that the shelter’s image of empowerment is empty but, rather, that it was imposed without regard to the disempowering consequences for women who didn’t match the kind of client the shelter’s administrators imagined. Thus they failed to accomplish the basic priority of the shelter movement—to get the woman out of danger.

In both cases, the lack of upfront planning and consideration to issues facing immigrant women left those women unprotected by laws and systems designed to support them; in effect, both systems were designed to protect literate white women but neglected everyone else. 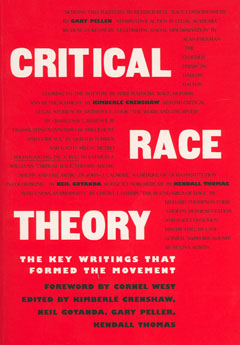 This anthology gathers core writing on the subject of critical race theory—a movement that looks at how the law is complicit in the creation and maintenance of oppression along the intersections of race, gender, sexuality, and class.