On the “mental readjustments” needed to adapt to the telegraph:

There was the man who brought a “message” into the telegraph office in Bangor, Maine. The operator manipulated the telegraph key and then placed the paper on the hook. The customer complained that the message had not been sent, because he could still see it hanging on the hook. To Harper’s New Monthly Magazine, which recounted this story in 1873, the point was that even the “intelligent and well-informed” continued to find these matters inscrutable: “The difficulty of forming a clear conception of the subject is increased due to the fact that while we have to deal with novel and strange facts, we have also to use old words in novel and inconsistent senses.”

A message had seemed to be a physical object. That was always an illusion; now people needed consciously to divorce their conception of the message from the paper on which it was written. Scientists, Harper’s explained, will say that the electronic current “carries a message,” but one must not imagine that anything—any thing—is transported. There is only “the action and reaction of an imponderable force, and the making of intelligible signals by its means at a distance.” No wonder people were misled. “Such language the world must, perhaps for a long time to come, continue to employ.”

Interestingly, often the meaning of the words changes more readily than new words invent themselves. Now, the word “message” refers to something ethereal, intangible. Soon enough, “book” may resemble not so much a bound object as a lengthy piece of writing (perhaps it does so already). Perhaps, in fact, you can follow the path of information’s disembodiment in that of another book: the dictionary. 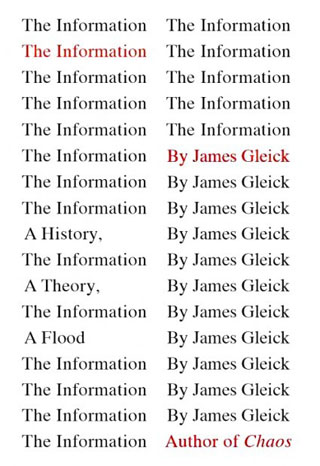 Glieck’s loosely organized tome details the many ways we’ve organized and communicated information over the ages; or, as is more often the case, failed to do so.