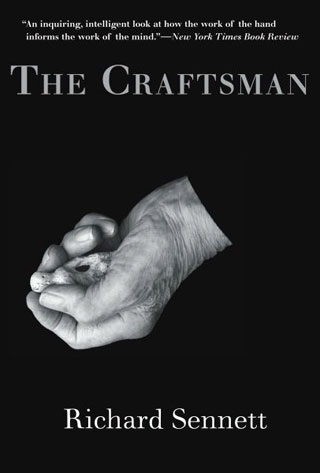 Sennett defines craftmanship as the desire to do a job well for its own sake. In so doing, he frees it of the bounds of carpentry or metalwork and extends the work of craft to that of the programmer, the doctor, and the parent. And he restores materialism—long maligned as being complicit in capitalism’s ills—as that which looks to “cloth, circuit boards, or baked fish as objects worthy of regard in themselves” (page 7).

On my decision to leave Norton—my home for nearly a decade— and join the ranks at Etsy.

Richard Sennett on the dangers of letting the computer do the work for you:

The architect Renzo Piano explains his own working procedure thus: “You start by sketching, then you do a drawing, then you make a model, and then you go to reality—you go to the site—and then you go back to drawing. You build up a kind of circularity between drawing and making and then back again.” About repetition and practice Piano observes, “This is very typical of the craftsman’s approach. You think and you do at the same time. You draw and you make. Drawing…is revisited. You do it, you redo it, and you redo it again.” This attaching, circular metamorphosis can be aborted by [the computer]. Once points are plotted on screen, the algorithms do the drawing; misuse occurs if the process is a closed-system, a static means-end—the “circularity” of which Piano speaks disappears. The physicist Victor Weisskopf once said to his MIT students who worked exclusively with computerized experiments, “When you show me that result, the computer understands the answer; but I don’t think you understand the answer.”

Sennett compares the work of drawing to that of a tennis player who practices her serves over and over; in the routine that develops from doing something many times, one is able to fully know the act, to explore and mature within it. Twyla Tharp speaks of the same thing:

I begin each day of my life with a ritual: I wake up at 5:30 a.m., put on my workout clothes, my leg warmers, my sweatshirts, and my hat. I walk outside my Manhattan home, hail a taxi, and tell the driver to take me to the Pumping Iron gym at 91st Street and First Avenue, where I work out for two hours. The ritual is not the stretching and the weight training I put my body through each morning at the gym; the ritual is the cab….

It’s vital to establish some rituals—automatic but decisive patterns of behavior—at the beginning of the creative process, when you are most at peril of turning back, chickening out, or going the wrong way.

A ritual, the Oxford English Dictionary tells me, is “a prescribed order of performing religious or other devotional service.” All that applies to my morning ritual. Thinking of it as a ritual has a transforming effect on the activity.

Tharp’s ritual and Piano’s drawing and redrawing are where the creative act—the craft—occur.

On the size of bricks and maker’s marks:

The size of bricks also matters in the message they send. The great historian of bricks, Alec Clifton-Taylor, observes that what most counts about them is their small size, which just suits the human hand laying a brick. A brick wall, he says, “is therefore an aggregation of small effects. This implies a human and intimate quality not present to the same extent in stone architecture.” Clifton-Taylor further observes that brickwork imposes “a certain restraint…brick is anti-monumental…the smallness of the brick unit was not in tune with the grander…aspirations of the Classicist.”

“An aggregation of small effects” recalls E.F. Schumacher’s refrain that because humans are small, small is beautiful. Furthermore:

Ancient brick workers who labored on the classical empire’s most grandiose projects still held in their hands a material with quite a different physical implication, and it was with this material that the anonymous slave brickmaker or mason made his presence known. The historian Moses Finlay wisely counsels against using a modern yardstick to measure maker’s marks as sending signals of defiance; they declare “I exist,” rather than “I resist.” But “I exist” is perhaps the most urgent signal a slave can send.

In the late 1920s, the philosopher Ludwig Wittgenstein set about designing a home for his sister in the Kundmanngasse, Vienna. It was to be “the foundation for all possible buildings,” a building so perfect that it could contain within it all other buildings. It was, of course, a failure.

During the same period, Wittgenstein met and befriended Adolf Loos, a professional architect also working in Vienna. Sennett contrasts the experiences of both Loos and Wittgenstein in their simultaneous efforts, noting that whereas the wealthy Wittgenstein had unlimited resources (to the point of electing to raise a ceiling three centimeters well after the stage in which such structural decisions could be easily accommodated), Loos was constrained by both budget and time. Loos was then forced to deal with errors in construction—to improvise—while Wittgenstein could spend his way around them. Loos’s buildings are livable, enjoyable places; Wittgenstein’s one and only venture into architecture was—by his own estimation—lifeless. From this story, Sennett draws a number of conclusions—guidelines for the craftsman that allow him to harness obsession to productive ends. These are worth quoting at length:

The good craftsman understands the importance of the sketch—that is, not quite knowing what you are about when you begin. Loos wanted the Villa Moller to be good of its kind when he began; his experience prepared him for the type-form, but he went no further until he got on site. The informal sketch is a working procedure for preventing premature closure. Wittgenstein’s generic drive expressed itself as wanting to know what he was doing, what he was going to achieve, before work on the site began. In this form of obsession, blueprint thinking prevails.

The good craftsman places positive value on contingency and constraint. Loos made use of both…[he] made metamorphosis occur in the objects by looking at problems on site as opportunities; Wittgenstein neither was minded nor understood the necessity to make use of difficulties. Obsession blinded him to possibility.

The good craftsman needs to avoid pursuing a problem relentlessly to the point that it becomes perfectly self-contained; then, like the rooms in the Kundmanngasse, it loses its relational character. Obsessing about perfect proportion was the cause of this loss of relational character in Wittgenstein’s vestibule. The positive alternative to this drive to resolve is allowing the object a measure of incompleteness, deciding to leave it unresolved.

The good craftsman avoids perfectionism that can degrade into a self-conscious demonstration—at this point the maker is bent on showing more what he or she can do than what the object does. This is the problem with the handmade hardware like the door handles in the Kundmanngasse house: they demonstrate form. The good craftsman’s remedy eschews self-consciously pointing out that something is important.

The good craftsman learns when it is time to stop. Further work is likely to degrade. Wittgenstein’s house clarifies when specifically it is time to stop: just at the moment when one is tempted to erase all traces of the work’s production in order to make it seem a pristine object.

What Sennett describes is perfectionism tempered by pragmatism—an acknowledgement that the only perfect thing—the only final solution—is death.

Sennett remarks on the (sadly, former) street culture of the LES:

In the surviving street cultures of the Lower East Side, booksellers clump together but display wares that separate themselves from their neighbors, like a musical theme and variations; hawkers using the steps choreograph themselves so that browsers can move from stoop to stoop; tenants hang out laundry from house to house so that key windows are not blocked. To the casual visitor it may look a mess, but in fact the street dweller has improvised a coherent, economical form. Rudofsky thought that this hidden order is how most settlements of poor people develop and that the work of improvising street order attaches people to their communities, whereas “renewal” projects, which may provide a cleaner street, pretty houses, and large shops, give their inhabitants no way to mark their presence on that space.

I would extend this to all people, not merely the poor; wealthy communities differ only so as to better demonstrate their wealth. When a suburban neighborhood association bans clotheslines or regulates how far from the curb the city-issued garbage can must be placed, it makes spaces that are clean, cold, and limpid—spaces where money happily resides but people cannot.