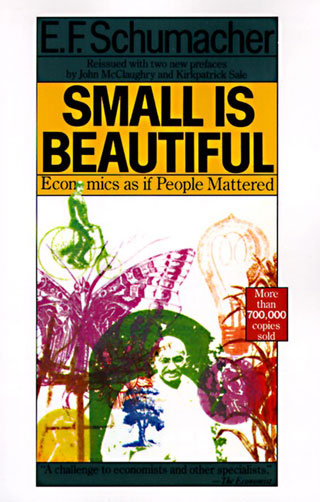 Schumacher brilliantly interrogates modern economics, revealing its philosophical underpinnings to be relentless supporters of goods over people. He proposes an alternative—a Buddhist economics—that takes as its imperative the quality of human life, not the quantity of profit. An excellent companion to Rushkoff’s Life Inc. in the argument that economics is not a natural science.

The Buddhist view takes the function of work to be at least threefold: to give man a chance to utilise and develop his faculties; to enable him to overcome his ego-centredness by joining with other people in a common task; and to bring forth the goods and services needed for a becoming existence.…To organise work in such a manner that it becomes meaningless, boring, stultifying, or nerve-wracking for the worker would be little short of criminal; it would indicate a greater concern with goods than with people, an evil lack of passion, and a soul-destroying degree of attachment to the most primitive side of his worldly existence.

Regarding work and leisure, people who call themselves humanist philosophers concern themselves, like trade union leaders, with a more equitable balance, that is, more leisure and less work for the worker through a greater share of the “abundance” created by the machine. But none of these humanist philosophers are tending a machine. Certain forms of escapist entertainment aside, leisure in itself is worthless without direction or content, and creative work can be more rewarding and fulfilling than many kinds of leisure. What is needed, it would seem to follow, is to rethink and readjust work to this end. Which is what all workers attempt to do daily on the job.

Theriault, How to Tell When You’re Tired, page 122

On the size of bricks and maker’s marks:

The size of bricks also matters in the message they send. The great historian of bricks, Alec Clifton-Taylor, observes that what most counts about them is their small size, which just suits the human hand laying a brick. A brick wall, he says, “is therefore an aggregation of small effects. This implies a human and intimate quality not present to the same extent in stone architecture.” Clifton-Taylor further observes that brickwork imposes “a certain restraint…brick is anti-monumental…the smallness of the brick unit was not in tune with the grander…aspirations of the Classicist.”

“An aggregation of small effects” recalls E.F. Schumacher’s refrain that because humans are small, small is beautiful. Furthermore:

Ancient brick workers who labored on the classical empire’s most grandiose projects still held in their hands a material with quite a different physical implication, and it was with this material that the anonymous slave brickmaker or mason made his presence known. The historian Moses Finlay wisely counsels against using a modern yardstick to measure maker’s marks as sending signals of defiance; they declare “I exist,” rather than “I resist.” But “I exist” is perhaps the most urgent signal a slave can send.

de Botton spends time with a biscuit manufacturing company in England, and uncovers the main source of sorrow in the modern workplace:

The real issue is not whether baking biscuits is meaningful, but the extent to which the activity can seem so after it has been continuously stretched and subdivided across five thousand lives and half a dozen different manufacturing sites. An endeavor endowed with meaning may appear meaningful only when it proceeds briskly in the hands of a restricted number of actors and therefore where particular workers can make an imaginative connection between what they have done with their working days and their impact upon others.

de Botton, The Pleasures and Sorrows of Work, page 80

So, take an activity—say, cooking, which may be one of the most natural, human things we can do for one another—and break it up into a thousand pieces and you’ll find yourself with a dreary workforce and inferior biscuits. That we ever got to this point, when it is so clearly a source of despair, is astonishing. Further proof that we need an economy built not to maximize profits but to improve the quality of human life.