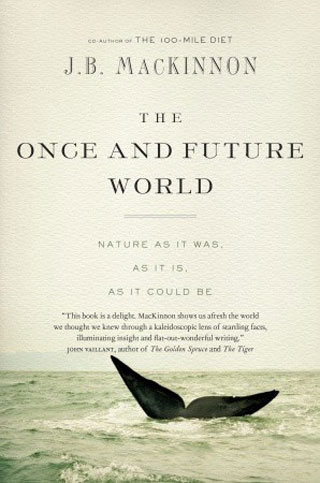 MacKinnon’s argument goes something like this: thinking of humanity and nature as at odds with one another is an error. So long has we’ve existed, there has never been a “nature” apart from us. Instead we need to see ourselves as part of nature, and that every interaction we have with the world entails stewardship of a nature that includes us. He calls for a “rewilding,” bringing the wild back into our lives rather than carving out a separate place for it. A compelling and beautiful read.

In The Once and Future World, MacKinnon describes growing up in a nameless prairie, and his first memories of nature. As a boy, he would sometimes spot a red fox pouncing on its prey, and fox dens abounded. But when he investigates this childhood vision, he learns that the red fox arrived on the prairie not long before he did: it’s an invasive species, brought to North America by British colonists nostalgic for hometown fox hunts. Lacking predators, the fox expanded aggressively, and now poses a threat to many native species. What he imagined as “nature” was in fact the consequence of human intervention.

[If] I took you onto the remaining grasslands around my hometown today, they would seem to you as ancient and unchanging as anywhere on earth. You’d smell sage and the vanilla scent of ponderosa pine bark, and you’d hear meadowlarks, and the bunchgrass would rustle like the restless dead. Cicadas would zing in swales of aspen, and if you were lucky with the year and the season, the brittle prickly pear would be in lemon-yellow bloom. The breeze would suck across the hilltop balds where it has carried away the soil and leave you blinking as it dried your windward eye. In the dust you might see stripes where gopher snakes had lain to warm themselves in the morning sun. You might see an ant lion spitting sand as it tries to knock insects into its pit trap. You might see fox tracks. The whole of the landscape, from sky to soil, would have the look and smell and feel of what we call nature. It is an illusion that has in many ways created our world.

MacKinnon, The Once and Future World, page 16

Letting go of that illusion is, according to MacKinnon, critical to forging a smarter and more sustainable relationship with the world. We’ve irreversibly changed nature, and we’re going to continue to do so; but that change needn’t be destructive.

[On] the day before I left for a colder and more landward place, I took one final swim—just a way of saying farewell to a new friend. I was wading ashore, already feeling nostalgic, when some creature lashed out from the sand, stung my ankle, and then zigzagged off into the murk. Nature may not be what it was, no, but it isn’t simply gone. It’s waiting.

MacKinnon, The Once and Future World, page 87