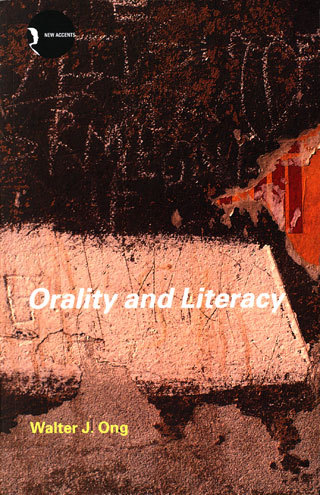 Ong’s is perhaps the only book I’ve discovered that carefully and thoroughly addresses the differences between oral and literate cultures. In pointing out that Plato used writing to deliver his objections to the written word, he says “Once the word is technologized, there is no effective way to criticize what technology has done with it without the aid of the highest technology available” (page 79).

Today, we are witnessing the reemergence in electronic form of oral patterns that have been hiding in plain site for generations. So deeply ingrained is our cultural disposition toward literacy, however, that many of us fail to recognize the oral characteristics of electronic media. Today, writers inevitably tend to describe the web in terms of “publishing” or, like H.G. Wells, to compare it to a vast library. And while the web does indeed support new kinds of publishing, it is also a place to “talk.”

Walter Ong calls this “secondary orality,” that is, orality which is written in the technical sense (via pecking at a keyboard) but which is fundamentally an element of oral culture. So, when you rant on Twitter about your coworker who can’t stop twirling her hair, or text your spouse to please pick up a bottle of wine on the way home, you’re engaging in an oral tradition, not a literate one.

Think that through, and it’s not surprising that replies emerged organically on Twitter and elsewhere; having a conversation means talking to other people. Absent the technical means to do that, we invented a method that was then widely, and rapidly, adopted.

Interestingly, with secondary orality, we have orality that looks like literacy, but isn’t. Strange things can happen when you miss that point. Flipboard aggregates content from your social graph in really lovely ways, but the juxtaposition of oral culture in an essentially literate design doesn’t always make sense. It’s quite odd to see your friend’s tweet about their breakfast burrito elevated to a strikingly designed pull quote. The pull quote is a design pattern that emerged from a culture of publishing—from a process by which an editor would carefully select a bit of text that, when extracted and enlarged, would resonate with the greater work. But here, there is no greater work, and no editor: only the blind act of an algorithm.

That algorithm knows a lot about who your friends are, and what they recommend, but it does not (yet, at least), recognize the difference between talking and publishing. The result is content that looks beautiful, typographically speaking, but whose effect is dissonant, rather than engaging. Designing for secondary orality is going to require developing new patterns, not merely pouring words into the old ones.