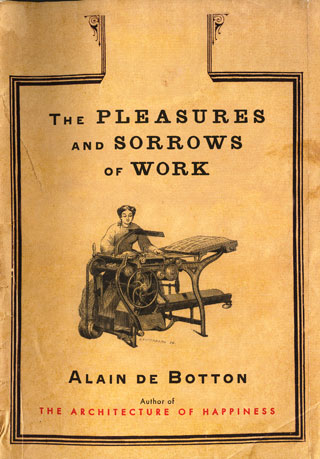 A lengthy and wonderful photo essay with stories of various kinds of work, from biscuit manufacturer to rocket scientist; a welcome companion to Theriault’s How to Tell When You’re Tired. Alas, de Botton finds many more sorrows than pleasures in the modern workplace.

The paradox of abundance and obscurity:

Two centuries ago, our forebears would have known the precise history and origin of nearly every one of the limited number of things they ate and owned, as well as of the people and tools involved in their production. They were acquainted with the pig, the carpenter, the weaver, the loom and the dairymaid. The range of items available for purchase may have grown exponentially since then, but our understanding of their genesis has diminished almost to the point of obscurity. We are now as imaginatively disconnected from the manufacture and distribution of our goods as we are practically in reach of them, a process of alienation which has stripped us of myriad opportunities for wonder, gratitude and guilt.

de Botton, The Pleasures and Sorrows of Work, page 35

The natural result of such a state is that the people who labor to produce these items remain as obscure to the world—and so, as defenseless—as are the means by which they toil. But it needn’t be this way.

de Botton spends time with a biscuit manufacturing company in England, and uncovers the main source of sorrow in the modern workplace:

The real issue is not whether baking biscuits is meaningful, but the extent to which the activity can seem so after it has been continuously stretched and subdivided across five thousand lives and half a dozen different manufacturing sites. An endeavor endowed with meaning may appear meaningful only when it proceeds briskly in the hands of a restricted number of actors and therefore where particular workers can make an imaginative connection between what they have done with their working days and their impact upon others.

de Botton, The Pleasures and Sorrows of Work, page 80

So, take an activity—say, cooking, which may be one of the most natural, human things we can do for one another—and break it up into a thousand pieces and you’ll find yourself with a dreary workforce and inferior biscuits. That we ever got to this point, when it is so clearly a source of despair, is astonishing. Further proof that we need an economy built not to maximize profits but to improve the quality of human life.