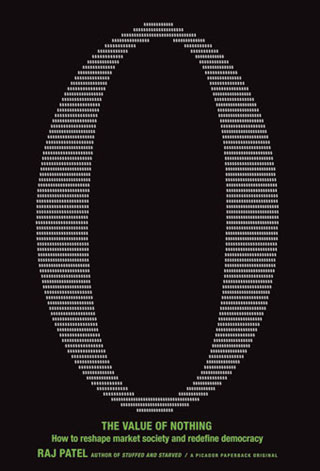 Raj Patel carefully demonstrates how traditional economics fails to properly account for many costs (whether environmental or social) and argues that the tragedy of the commons is one borne of privatization and corporatism, not an innate fact of the commoners themselves.

On the masks worn by the Zapatistas in Mexico:

The room of balaclavas is a sign that indigenous people are engaging in democracy without its most infection symptom—elections. Rather than sitting in individual air-conditioned offices in front of large portraits of themselves, these democratic officials serve their communities anonymously, with their faces hidden by the masks of the office they have assumed. The ski masks also serve another purpose. They are a reminder that when you visit the Junta, you aren’t there to see a particular person—you came to see the people. The masks reveal that the most important face in the room is yours.

Patel, The Value of Nothing, page 182

Forced to assume the visage of the people, the politicians are unable to forge their own, separate brands. In the heat of Chiapas, the ski masks must also represent the burden that the people place on them.